The U.S. Open at Merion: Hole-by-Hole on The Front Nine 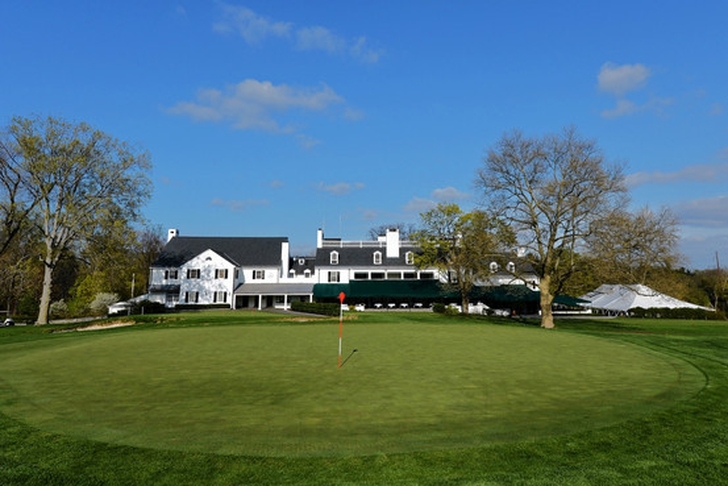 Take a trip through the front nine holes of the Merion Golf Club East Course in suburban Philadelphia, site of the 2013 U.S. Open Championship this weekend. Video tours of each hole by the Golf Channel's Frank Nobilo, and hole descriptions from the USGA's website.

Check out the back nine holes here.

This is one of the great opening tee shots in golf with the teeing ground situated right beside the clubhouse patio. Expect to see long irons from the teeing ground, with a few players favoring fairway metals, which would leave a wedge into the green. A sycamore tree off to the right of the tee will likely prevent players from attempting to drive the green, which pitches from back to front. If played properly, this is a birdie opportunity.

This fairway has been shifted to the player's right to create a more demanding tee shot. Players have a choice from the teeing ground: play the hole conservatively as a three-shotter, or attack the hole with a driver or 3-wood. Out of bounds looms closely on the right, and the rough on the left is some of the deepest on the course. From the drive zone, players will need to decide whether to lay up short of the cross bunker about 35 yards in front of the green, or attempt to fly it with their second shots. The putting green is relatively flat. Eagles and birdies are real possibilities, but one mistake along the way could lead to a bogey or worse.

Although it has the most receptive green of Merion's par threes, this is a very difficult hole. Both the 219- and 256-yard teeing grounds will be used. The green pitches steeply from back left to front right. Players will not want to miss the green to the left under any circumstances, as keeping a recovery shot on the green from there will be very difficult. The bunker at the front right of the green is one of the deepest on the course.

This is the second par five on the course and the last one that players will encounter. A new teeing ground has been added, which brings the fairway bunkers into play. The tee shot features one of the most difficult drive zones to hit because of the pronounced right-to-left slope.

The second shot is awkward as players will not be able to see over the cross bunker. Most players will lay up with an iron to leave themselves with a lofted club for their third shot to a green that slopes from back left to front right and is fronted by a creek.

This is perhaps Merion's finest driving hole. It doglegs from right to left with a stream bordering the left fairway for the entire length of the hole. The fairway also slopes from right to left. Right-handed players will face a hook lie for their long-iron approach shot, which can be bounced onto what is, without a doubt, the most severely sloped green on the course. Players must not leave their second shots right of the hole, or they will face exceptionally fast putts. Players who are able to par this hole will likely pick up close to a full stroke on most of the field.

This second consecutive difficult par 4 features a semi-blind tee shot over a crest to a bowl-shaped fairway. Most players will be left with a slightly uphill,

mid- to long-iron approach shot to a green that is pitched from the back left to the front. The player will also have to negotiate a false front, requiring an approach that either bounces up onto the green or flies to the middle of the green. Par is a very good score on this hole.

This hole begins a stretch of holes that could provide several birdie opportunities. Most of the field will hit long irons from the teeing ground to a semi-blind, angled drive zone, leaving a lofted approach shot. A slightly pushed tee shot brings overhanging trees and out-of-bounds into play on the right side. The large green is perched up on a knob and has three distinct plateaus. A severe drop-off to the left will leave a difficult up-and-down.

Players will likely hit anything from a fairway metal to a long iron to an S-shaped drive zone with thick fescue rough both left and right of the fairway. The relatively short approach shot is to a small green protected by deep rough and bunkers.

The putting surface has wonderful contours and slopes from back left to front right. Played properly, it's a good birdie opportunity, but bogey is a distinct possibility for players who miss the green. Expect to see the tee markers moved up one day to give players an option of driving up near or onto the green.

This difficult par 3 is played downhill to a kidney-shaped green. Most players will hit 6-irons to the front hole location, which is deceptively tough given the water hazard that sits in front and to the right of the green.

Long irons will be required to carry the left bunker and reach the back of this angled green. There will be many more bogeys than birdies on this one-shotter.