The U.S. Open at Merion: A History 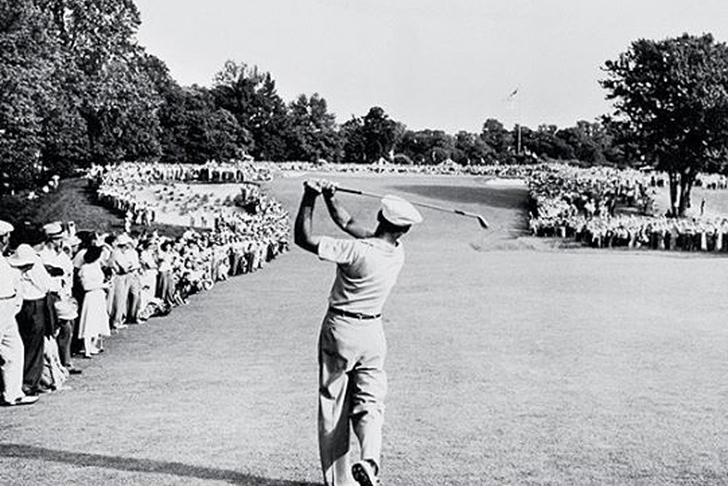 For the first time since 1981, the U.S. Open returns to what is considered by many to be one of the finest examples of golf course design in the United States. The reason for the 32-year gap is simple: Merion is built on a mere 110 acres, less than half the size of most modern courses. It has been lengthened by 500 yards for the 2013 Open, yet still measures less than 7,000 yards at 6,996.

The list of winners it has produced is a testament to its design. Lee Trevino won his second Open there in 1971. Ben Hogan memorably won the second of his four U.S. Open titles at Merion in 1950, including a legendary shot on the 72nd hole of the tournament. Needing par to force a playoff, Hogan hit a 1 iron from the fairway of the long par 4, a seemingly impossible shot that gave us one of the most famous pictures in golf history. Said Trevino years later, "even God can't hit a 1 iron." Hogan two-putted to force an 18-hole playoff to win the tournament. Today, a plaque sits embedded in the 18th fairway where Hogan hit the legendary shot.

But perhaps to victory is more famous than Bobby Jones completing the Grand Slam in 1930 by winning the U.S. Amateur Championship at Merion in dominating 8 & 7 fashion.Like Hogan, Jones also has a plaque, this one placed in a rock near the 11th tee - the hole Jones won on - honor the accomplishment for all to see.

The first hole at Merion is thought to be quite simply one of the finest opening holes in all of golf. It is a very short par 4, playing at just 350 yards in this year's Open, but with a slight dog-leg to the right. While visible from the tee, it would not be wise to attempt to drive the green, with nine bunkers on the hole ready to snare even the slightest mishit.

The course then crosses Ardmore Avenue, which divides it in two. The par 5 second hole is one of only two on the course, and has been toughened significantly for the open. The fairway has been shifted to the right, butting right up against the street, which is out of bounds and looms large in the head of anyone standing on the tee, with miserable rough to the left, should you err too far in that direction. At 556 yards, it is reachable in two shots for most pros, but a bunker straddles the fairway some 30 yards short of the green.

Measuring at 628 yards, the par 5 fourth is the longest on the course and the last of the par-fives. If played straight-up, the hole is a relatively easy two-put par. Put only the foolheartedly will try to reach the green in two. There is a large crown some two-thirds of the way down the fairway, making the second shot blind. The green itself is surrounded by seven bunkers to the sides and rear, with a stream flowing in front.

The eighth hole is the last and shortest for four straight par-fours, measuring at 359 yards in the tournament this year. But it is by no stretch the easiest. There are bunkers on either side of the fairway just short of where a pro would drive to. They shouldn't worry the big hitters, but they feature prominently off the tee and could easily get in player's heads. Like most short holes, the green is painfully small and surrounded by bunkers. Good shots will leave an easy birdie put, but an errant one will lead to an almost-certain bogey.

At just 303 yards, the par 4 tenth seems like a laughably easy hole for today's long hitting pros that will yield countless birdie opportunities and excellent eagle chances. And a perfect drive will yield those indeed, but a perfect drive it will take. The hole bends severely to the left as it approaches the green, requiring significant right-to-left action on any shot. To massive bunkers and overgrown grass sit between the green and the fairway for anyone who attempts to reach the green in a straight line but comes up short. Overshoot the green and another prominent, albeit small, bunker lies await.

The 11th, where Jones completed his Grand Slam, presents another birdie opportunity if played right. A 367 yard par 4, the tee shot sends players into a valley some 10 feet below the height of the green. But it's the approach that poses the real threats. The green is flanked on the front, back and right by a rock-banked creek, which occasionally floods the green, making it one of the firmest on the course. In the 1934 U.S. Open, Bobby Cruickshank hit his approach a little short to the green and into the creek. But to everyone's astonishment, it hit a rock in the shallow stream and bounced up onto the green.

Often compared to the infamous 7th hole at Pebble Beach, the 13th at Merion is laughably short, just 115 yards long. Players will be salivating at the birdie opportunity, and a good drive will yield them one. But an error here is as punishing as they come. The green is the smallest on the course by some measure, and has a massive, steep bunker protecting its front, two more large bunkers in the back and two smaller ones on the left. A stream flows to the right of the green to snare any ball it that way. All five bunkers around the green are either exceptionally deep or quite slanted, and getting out of them and onto the green for par is probably a more difficult shot than the one off the tee.

The last five holes at Merion are legendary for being one of the toughest finishes in golf. Both the 464 yard par 4 14th and the 411 yard par 4 15th hug a road on their left side which is out of bounds. The 14th dog-legs to the left, with the 15th almost a perfect inverse dog-leg to the right. The tee shot at 15 in particularly intimidating, with the hole bending sharply to the right and out of bounds looming tightly on the left side beyond the bend to catch anything hit too far.

The 16th at Merion is known as the "quarry hole" for the overgrown quarry that cuts across the fairway in front of the green. Playing at 428 yards and par of 4, the quarry looms large in the approach shot, often calling for a medium iron to carry it to the green. The quarry, unfortunately for players, is in bounds, and nearly impossible to get out of.

The 17th runs across the quarry in reverse direction, although it now lies at the foot of the tee and is no issue. What will be an issue is the massive ridge in front of the green on this 246 yard par 3, which must be carried on the fly to have any hope of reaching.

The 18th at Merion is one of the most famous finishing holes in golf, a reputation bolstered by Hogan's 1 iron. Drives need to carry some 250 yards over the quarry off the tee, and there there is another dilema in a crown ridge 300 yards from the tee. Laying up short of the ridge leaves a mid-to-long iron approach off of a favorable lie. Carrying it leaves a shorter approach, but off of a difficult downhill lie.