Warriors vs. Rockets Game 2 Preview & Prediction: Can Houston Even The Series Or Will Golden State Take A Commanding 2-0 Lead? 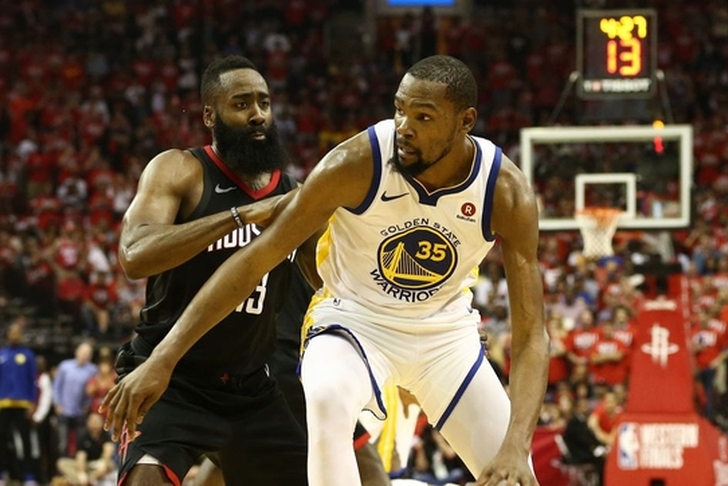 The Golden State Warriors took Game 1 from the Houston Rockets in the Western Conference Finals on Tuesday night, shaking off a slow start to cruise to a dominant 119-106 victory. As we roll into Game 2, the stakes are even higher. Can Houston manage to even the series before heading to Oakland, or will the Warriors take a commanding 2-0 series lead on the road?

What they're saying about the Houston Rockets:
How important P.J. Tucker and Luc Mbah a Moute are to the Rockets (The Dream Shake)
Eric Gordon wants the Rockets to play less isolation in Game 2 (Fansided)
Rockets-Warriors Q&A with TNT's Reggie Miller, Chris Webber (Houston Chronicle)

What they're saying about the Golden State Warriors:
Burning questions for Game 2 of the Western Conference Finals (Golden State of Mind)
Warriors Tonight: Houston, you definitely have a problem (San Jose Mercury News)
Is Kevon Looney the Warriors’ X-factor on defense against the Rockets? (SFGate)

Key to the game:
Can Houston get their role players involved - and can they deliver?

How did Houston lose Game 1 despite getting 41 points from Harden and 23 points from Chris Paul? Only two other players scored in double figures and their major role players - Trevor Ariza, P.J. Tucker, Gerald Green, Luc Richard Mbah a Moute - combined for just 15 points.

The reason for that is because of the amount of isolation plays Houston ran - 45, to be exact, which is the most of any team in the last five years. Harden is perhaps the best isolation player in the league but it made their offensive much easier for Golden State to defend - and kept those role players from becoming legitimate threats on that end of the court.

As important as star players are in the playoffs, role players often make the difference in games between two relatively evenly-matched teams. Houston simply needs more from their supporting cast if they're going to get back into this series, which they can do by running a more efficient offense.

Prediction: Warriors win 117-112
Houston knows they can't go down 0-2 and lose both games at home and expect to win the series. As such, look for them to come out motivated playing at a high level - but it won't be enough. Stephen Curry is going to have a much better game, Kevin Durant is unguardable, and Houston's iso-ball will keep them from matching the Warriors in the fourth quarter. Golden State will pull away late.