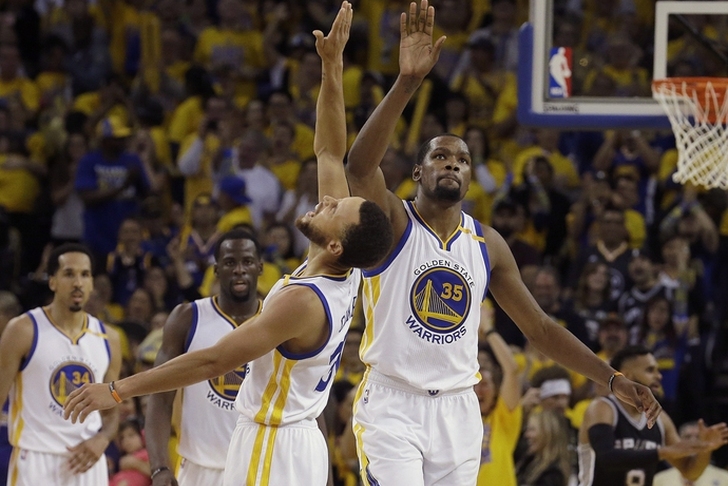 After pulling off a huge comeback in Game 1, the Golden State Warriors turned Game 2 into a blowout early in the first half and never looked back, cruising to an easy 136-100 win over the San Antonio Spurs.

The Warriors were on fire from the field all night long, making 56.2 percent of their shots while shooting 18-37 from three-point range. Stephen Curry led the way with 29 points, seven rebounds and seven assists, and set the tone with 15 points in the first quarter.

Stephen Curry was cooking in the 1st!pic.twitter.com/wF54Terwun

A 19-3 run that stretched into the second quarter gave Golden State a 25-point lead, and that ballooned to a 72-44 advantage at the break. Seven different players scored in double figures, including Kevin Durant (16 points) and Draymond Green (13 points, nine rebounds, six assists). All 13 Warriors players scored in the game.

San Antonio was a much different team without Kawhi Leonard, who missed the game after re-aggravating an ankle injury in Game 1. They never led in this game after leading by as many as 25 points on Sunday.

Jonathon Simmons was the lone bright spot for the Spurs, scoring a team-high and playoff career-high 22 points after getting the start in Leonard's absence.

Jonathon Simmons catches fire with 17 first half points for the @spurs. pic.twitter.com/ZK4M3v2C1W

The series shifts to San Antonio for Game 3 on Saturday. Tip-off is set for 9:00 pm ET on ESPN.