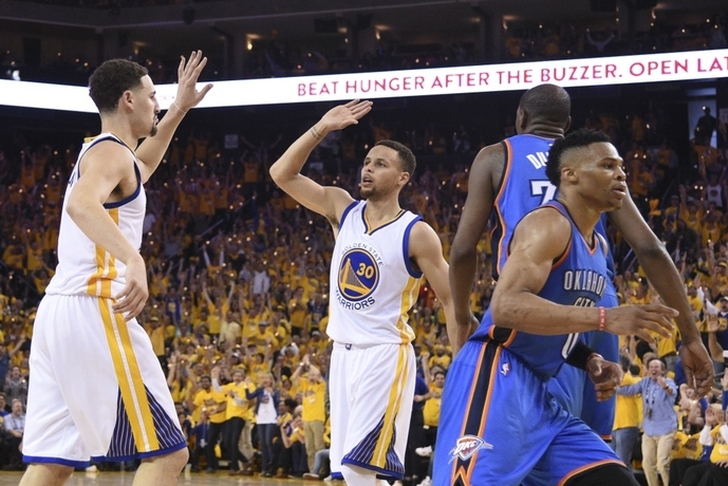 The Golden State Warriors rebounded from their Game 1 loss in resounding fashion, dominating the Oklahoma City Thunder with a 118-91 blowout victory in Game 2. The Warriors still have not lost back-to-back games this season, and series is now tied 1-1.

Golden State quickly built a seven-point lead in the first quarter, and they were in control until the Thunder took a one-point lead with less than two minutes remaining in the first half. However, the Warriors closed the period on an 11-2 run to take a 57-49 lead into halftime.

Just as OKC used the third quarter to change the momentum in Game 1, Golden State used it to turn this one into a blowout. Some incredibly shot shooting from Stephen Curry - who scored 15 straight points for the Warriors in a minute and a half - sparked a 24-11 run that turned this into a blowout.

Curry's 28 points paced the Warriors, who also got 15 points from Klay Thompson. Draymond Green had another excellent all-around game with 10 points, eight rebounds and seven assists.

Oklahoma City was led by 29 points from Kevin Durant, but he didn't get a lot of help from his teammates. Russell Westbrook scored just 16 points on 5/14 shooting, and no one else scored in double figures.