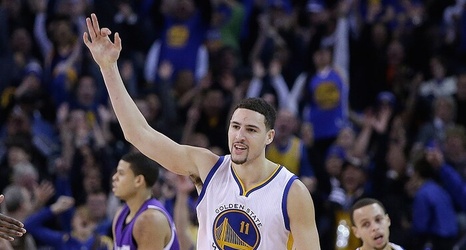 The number 37 will forever be synonymous with Klay Thompson. That’s because on Jan. 23, 2015, the Warriors guard set an NBA record for points in a quarter with 37 in the third period of a 126-101 win over the Sacramento Kings at Oracle Arena in Oakland.

After going 3-for-9 from the floor, and 2-for-5 on 3-pointers, in the first half, Thompson, the 24-year-old guard who was three weeks shy of playing in his first All-Star Game, sent the home crowd into a frenzy with a legendary performance. The scoring binge started over two minutes into the third period, when he drove from the right wing to the left side of the key, spinning into a 12-foot jumper that put the Dubs ahead 60-58.