KD isn't the player the Warriors will miss the most, Steve Kerr says 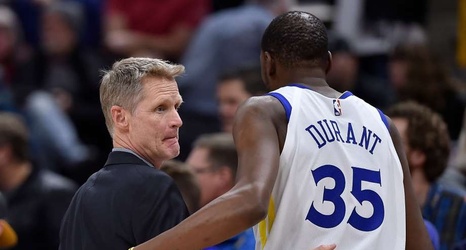 Kevin Durant, who recently dismissed the Warriors' motion offense as limited, is not the player Golden State will miss the most this season, coach Steve Kerr says.

No, the biggest loss is Klay Thompson, according to Kerr.

"Klay being out is really the big change," Kerr told The Athletic. "Losing Kevin, Andre (Iguodala), Shaun (Livingston), obviously, those are huge losses. Losing Klay on top of all that really changes the way we're going to have to play at both ends.

"Klay was always an integral part of everything. Movement on offense, but also the guarding of the ball handler on defense, switching onto bigs.