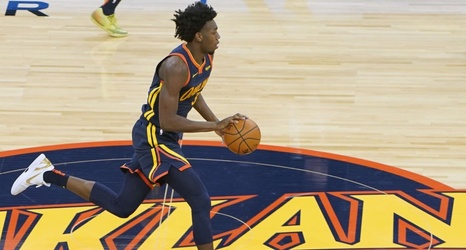 SAN FRANCISCO, CALIFORNIA - JANUARY 20: James Wiseman #33 of the Golden State Warriors dribbles the ball up court against the San Antonio Spurs during the first half of an NBA basketball game at Chase Center on January 20, 2021 in San Francisco, California. NOTE TO USER: User expressly acknowledges and agrees that, by downloading and or using this photograph, User is consenting to the terms and conditions of the Getty Images License Agreement. (Photo by Thearon W. Henderson/Getty Images)

Rookie center James Wiseman is out indefinitely with a torn meniscus. According to ESPN, there’s a chance that he could miss the remainder of the season.