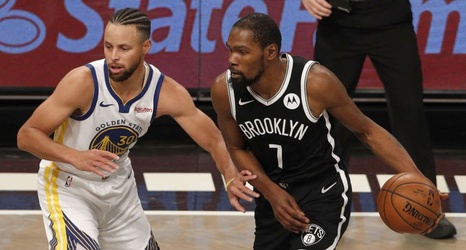 NEW YORK, NEW YORK - DECEMBER 22: (NEW YORK DAILIES OUT) Kevin Durant #7 of the Brooklyn Nets in action against Stephen Curry #30 of the Golden State Warriors at Barclays Center on December 22, 2020 in New York City. The Nets defeated the Warriors 125-99. NOTE TO USER: User expressly acknowledges and agrees that, by downloading and/or using this photograph, user is consenting to the terms and conditions of the Getty Images License Agreement. (Photo by Jim McIsaac/Getty Images)

In the era of super teams, the Golden State Warriors collection of talent in 2017 was seen as game-breaking.