From Dobbs Ferry to the NBA: Eric Paschall and Donovan Mitchell are ready for the moment 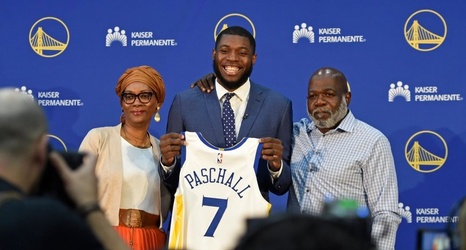 SAN FRANCISCO — Dobbs Ferry, New York, is a small, quiet town in Westchester county with a population of 10,000 people. On June 20th, 30 of them packed into a private room at Doubleday’s Restaurant and Bar. They watched anxiously as a TV hanging from the wood-paneled wall broadcast the NBA Draft from 30 miles south in Brooklyn.

Juan Paschall recalls the stress of that night as he watched his son, Eric, slide past his projected range in the middle of the first round and into the second, until he was mercifully scooped up by the Warriors. He also remembers the person who helped steady the nervous family.