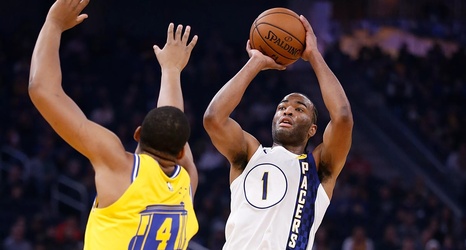 Even though the Golden State Warriors aren’t participating in the NBA’s restart in the Orlando, Florida bubble, there’s still plenty to keep an eye on.

Armed with a top five pick in the 2020 NBA Draft, a $17.2 million trade exception, and the mid-level exception, general manager Bob Myers will have to fill out the roster around presumptive starters Stephen Curry, Klay Thompson, Draymond Green, and Andrew Wiggins.

One option Myers has is to target Indiana Pacers’ wing T.J. Warren, who recently erupted for 53 points against the Philadelphia 76ers.