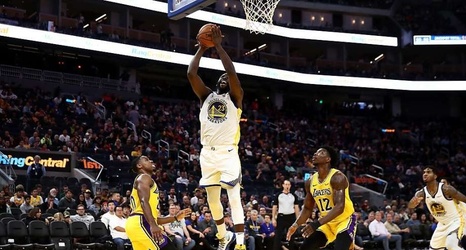 Warriors forward Draymond Green was removed from the game with an injury early in the first quarter of the Warriors' season opener against the Los Angeles Clippers at Chase Center on Thursday night. TNT reported that Green suffered a "right elbow contusion," and that his return was to be determined.

The injury appeared to surface as Green set a high screen for D'Angelo Russell near half-court. At the conclusion of the play, Green could be seen grimacing in pain.

Appears to be a shoulder issue for Draymond Green after setting this screen on Beverley (video via @gifdsports) pic.