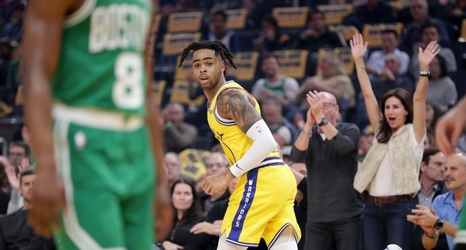 NEW ORLEANS — Warriors guard D’Angelo Russell will miss at least two weeks with a sprained right thumb he suffered in Friday’s loss to the Boston Celtics.

An MRI Friday night confirmed the sprain. Russell will be re-evaluated in two weeks and will miss at least eight games. The injury further depletes a roster that now has just one healthy point guard and will force coach Steve Kerr to get creative with his offense.

“I’m just dealing with it, so next man up,” Kerr said Friday. “I thought Ky Bowman came in and gave us a really good lift after D-Lo went out, so we’ll keep playing him.