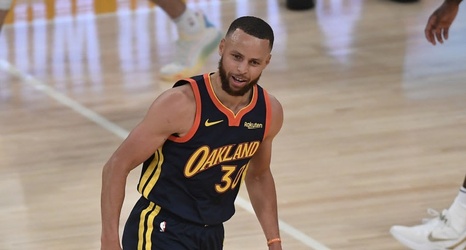 LOS ANGELES, CALIFORNIA - MAY 19: Stephen Curry #30 of the Golden State Warriors reacts after hitting a three-point shot during the final seconds of the first half of an NBA Tournament Play-In game against the Los Angeles Lakers at Staples Center on May 19, 2021 in Los Angeles, California. NOTE TO USER: User expressly acknowledges and agrees that, by downloading and or using this photograph, User is consenting to the terms and conditions of the Getty Images License Agreement. (Photo by Kevork Djansezian/Getty Images)

On the final night of the NBA Play-In Tournament, the Golden State Warriors have emerged as the favorites to defeat the Memphis Grizzlies and punch their tickets to the playoffs.