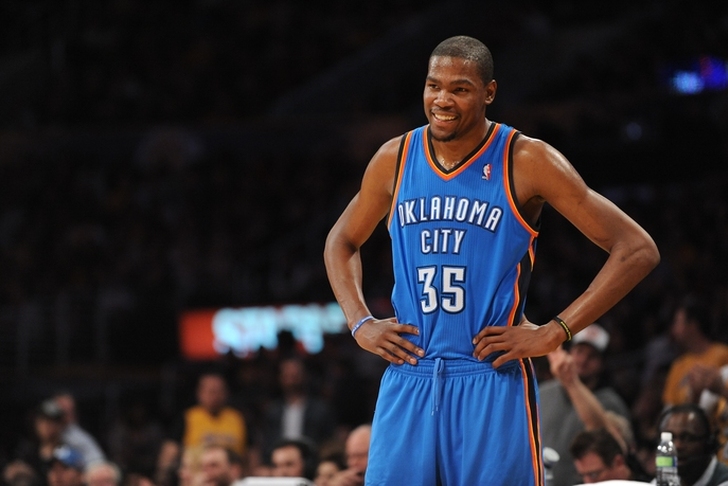 Oklahoma City Thunder forward Kevin Durant will be a free agent after this season, and every team in the NBA would love a chance to sign him if he hits the open market. Adrian Wojnarowski of Yahoo! Sports reported Tuesday that the Golden State Warriors are serious threats to sign the superstar if the leaves the Thunder this offseason.

"It isn’t only that the NBA champions are determined to recruit Oklahoma City’s Kevin Durant," Wojnarowski writes. "The truth is that they’re the most intriguing destination to him. If Durant leaves the Thunder, the Warriors are the significant frontrunners to sign him."

Wojnarowski says Durant isn't close to leave the Thunder yet, but writes "outside of a Thunder championship closing down the process before July 1, there’s a strong expectation that Durant will hit the road, tour campuses and become a recruit again."

Adding Durant would likely mean the Warriors lose both Andre Iguodala and Harrison Barnes. The Warriors would need to clear their contracts to make room for the needed cap space to add Durant. Download the Chat Sports Android and iPhone app for more on Durant and the Warriors.

But the Warriors aren't the only team mentioned by Wojnarowski. Also listed are the Washington Wizards, Miami Heat and Houston Rockets as the "well-known suitors." The Los Angeles Clippers also make an appearance, with Wojnarowski reporting they'd dump Blake Griffin to land Durant.

Durant is focused on leading this current Thunder team to an NBA Championship. But in the background, Wojnarowski reports, the Warriors have already begun working on their plan to land Durant.