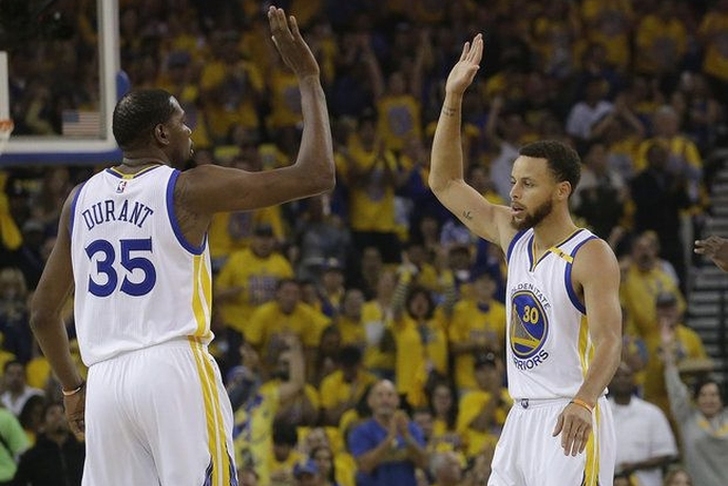 The Golden State Warriors are taking advantage of the short-handed San Antonio Spurs in Game 2 of the Western Conference Finals, leading 72-44 at halftime.

Without Kawhi Leonard, the Spurs haven't been able to stop Golden State's offense in the opening 24 minutes. The Warriors finished the half shooting 65.1 percent from the field and are 11-17 from three-point range.

Stephen Curry seemingly picked off where he left off in Game 1, scoring 19 points in the first half - including 15 in the first quarter.

Stephen Curry was cooking in the 1st!pic.twitter.com/wF54Terwun

The Warriors led by double digits just seven and a half minutes into the game, but a 19-3 run stretching into the second quarter is what really turned this game into a blowout.

Klay has found his stroke.@warriors are on a 19-3 run on ESPN. #DubNation lead series 1-0. #NBAPlayoffs pic.twitter.com/a2sp5DKqHG

All 10 Warriors players who saw time in the first half scored a basket. Six different players had at least six points, and Kevin Durant (11 points) joined Curry in double figures.

The highlights were few and far between for the Spurs, who looked overmatched without Leonard (remember, they lost Tony Parker for rest of the season earlier in the playoffs as well). Jonathon Simmons, who started for Leonard, led San Antonio with 17 points in the half.

Jonathon Simmons is closing in on his #NBAPlayoffs career high (18).

Kyle Anderson (four points, 2/5 FG) was the only other Spurs player who made more than one shot.