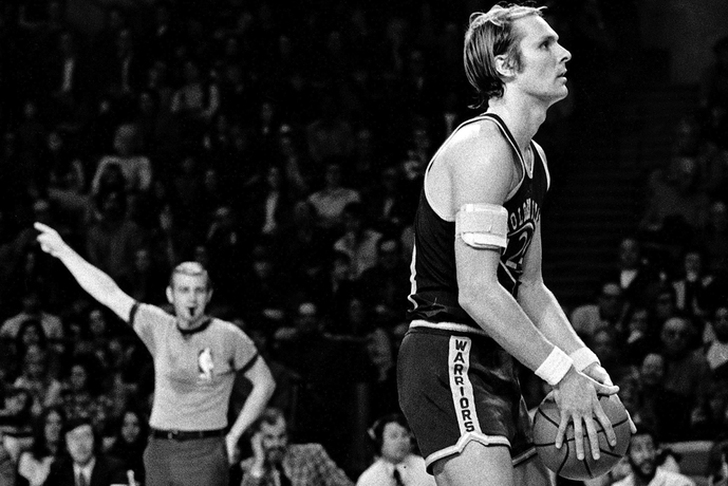 For Warriors fans, late summer is the hardest part of the year. Summer League, with all its tantalizing promise, has come and gone, and now we sit around twiddling our thumbs for two months, waiting for our entrée to arrive.

Last season’s success makes the wait interminable. The Dubs are coming off their best season since the early 90’s, and the front office has found ways to strengthen an already-impressive roster. With the addition of Andre Iguodala and the subtraction of Richard Jefferson and Andris Biedrins, the Warriors are being touted as legitimate championship contenders. For the majority of fans, this is the first time they’ve heard that in their entire lives.

Unfortunately for us, the season doesn’t start tomorrow. Stephen Curry is in Africa, doing charity work. Harrison Barnes is at the movies. Andrew Bogut is back in Australia, (probably) hunting kangaroo in the outback with his spirit guide.

There are ways we can satisfy some of our basketball cravings, though - let’s take a look back at the last time the Warriors were legitimate contenders – the last time they won it all, back in 1975.

The 1974-75 Warriors were coming off four consecutive second-place finishes in the Pacific division. After narrowly missing the playoffs in 73-74, the Warriors shocked the league by dealing Hall-of-Fame center Nate Thurmond to the Chicago Bulls for Clifford Ray. While the trade didn’t look good in the long run (Ray is more famous for saving a dolphin’s life at Marine World than for any of his on-court exploits), it paid immediate dividends for the Warriors.

With Thurmond gone, Rick Barry took over as the team’s undisputed alpha dog. Barry embraced his role, averaging 30.6 points per game and leading the league in steals, and the Warriors finally won the Pacific Division title with a 48-34 record. Jamaal Wilkes (then known as Keith Wilkes) was named Rookie of the Year after averaging over 14 points and 8 rebounds in his debut season, and coach Al Attles kept his players fresh by successfully managing a 10-man rotation. The fast-paced Warriors attack would have made Don Nelson proud - the 74-75 team averaged 108.5 points per game.

Despite Barry’s dominance and the team’s success, the Warriors entered the playoffs as serious underdogs. The Washington Bullets and Boston Celtics were the real contenders, both finishing the season 60-22, and the Warriors were written off as cannon fodder before the playoffs began. In the playoff format of the day, conference champions received a first-round bye, so the Warriors began their run in the conference semi-finals against the Seattle Supersonics.

A testy series with the Bill Russell(!)-coached Sonics went to six games, but the Warriors eventually won out. It had looked as though Seattle had all the momentum after tying theseries at 2-2 – Rick Barry had fouled out of Game 4 after scoring just 11 points – but Barry bounced back immediately, marshaling the troops in Game 5 and scoring 31 points in a decisive Game 6 performance.

The Western Conference Finals matched the Warriors up against their former star, Nate Thurmond. Thurmond had recorded the NBA’s first quadruple-double in his Chicago debut, but had faded over the course of the season – by the time he met his former team, his tank was almost completely empty. Behind the efforts of Chet Walker and Jerry Sloan (!!), the Bulls jumped out to a 3-2 series lead. It looked as though all hope was lost, but no one told Rick Barry. Barry dominated Game 6, scoring 36 points and going 8-8 from the free throw line, and the Warriors forced a decisive Game 7 in Oakland.

Neither team shot well in Game 7, but the combined efforts of Barry and Jamaal Wilkes turned out to be more than Chicago could handle. The two combined for 45 points, and the Warriors won 83-79, booking their trip to the Finals.

In the Eastern Conference Finals, the Bullets had beaten the Celtics in six games, and the media considered the Warriors-Bullets series to be a mere formality – Washington, led by future Hall-of-Famers Elvin Hayes and Wes Unseld – would walk all over Golden State. The Warriors’ run to the finals was so unexpected that they couldn’t even play at their usual home – the Oakland Arena was already fully booked for that week, so the Warriors were forced to play at the Cow Palace at Daly City instead.

In Game 1, the Bullets roared out to an early 14-point lead, and it looked as though the Warriors were as overmatched as the media had predicted. Trailing 54-40 at halftime, Golden State brought unheralded rookie Phil Smith off the bench. Smith responded by lighting up the Bullets for 20 points in 31 minutes, and the Warriors shut down the Bullets on defense to take Game 1 on the road, 101-95.

In Game 2 at the Cow Palace, the Bullets once again jumped out to an early lead. Rick Barry (doing his best Steph Curry impression) racked up 36 points, and the Warriors finally retook the lead with second remaining. Washington had two opportunities to win in the closing seconds, but both shots were off target.

By Game 3, the Warriors were full of confidence. They were somehow up 2-0 on the heavily favored Bullets, and Rick Barry knew they couldn’t afford to let up the pressure. Barry picked up right where he left off, scoring 38 points in a dominant performance. Jamaal Wilkes continued to stymie Elvin Hayes, and the Warriors’ deep bench absolutely crushed Washington’s overmatched reserves. The Warriors took Game 3 109-101, and suddenly the Bullets had their backs against the wall.

In Game 4, back in Washington, it looked as though the Bullets had finally found an answer for Barry. Mike Riordan marked him tightly from the opening tipoff, and his physical defense helped the Bullets amass another early double-digit lead. Late in the first quarter, a hard foul on Barry led to a physical confrontation, and Warriors’ coach Al Attles jumped into the fray to protect his star player. Attles was ejected, but his intervention saved Barry from being ejected himself.

Assistant Coach Joe Roberts took over coaching duties, and after the game resumed Barry single-handedly put the Warriors back into contention. The Warriors stepped up their defensive pressure over the course of the game, and the score remained tight throughout. Late in the fourth quarter, the Warriors found an unlikely hero in journeyman guard Butch Beard. With Barry constantly double-teamed, Beard took over down the stretch, matching the Bullets basket-for-basket and scoring the Warriors last seven points. With the game on the line, Beard nailed two free throws, and the most improbable sweep in NBA history was complete. Rick Barry was named Finals MVP, and the Golden State Warriors took home their first (and to date, only) NBA Championship since moving to California.

The 1975 Warriors found success through hustle, bench productivity, and team defense. Barry was the top dog on offense, but it was the team’s faith in coach Al Attles and overall determination that helped them overcome far more heralded, star-laded teams. The 2013-2014 Warriors can learn a great deal from the success of the last championship contender from the Bay – and if all goes well, we might just see history repeat itself.