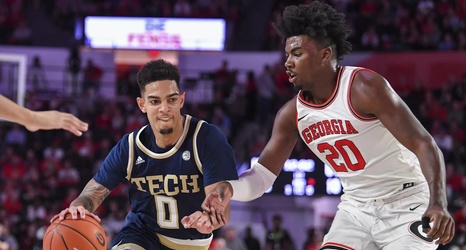 Georgia Tech (3-2, 1-0) defeated Bethune-Cookman (5-3) on Sunday night, but it wasn’t pretty. The Jackets started off the game without their star center, James Banks, due to disciplinary reasons. Fortunately Banks was able to check in with about 15 minutes to go in the first half, but Tech found themselves quickly in a 20-10 hole. The Jackets kept fighting and found themselves down just 2 (36-34) at half after Bubba Parham’s buzzer beating shot to end the half. The Jackets tried to pull away several times in the second half but the Wildcats kept fighting and never let Georgia Tech lead by more than 4 points.