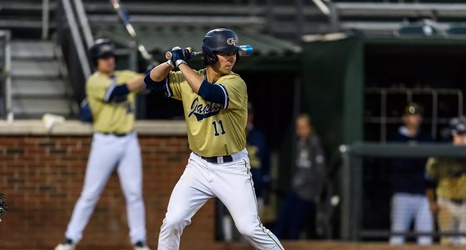 Connor Thomas (6-1, 2.83) faced sophomore RHP Chase Walter (5-4, 4.77) of Peachtree City on a weather threatening day with an early start. It was a near repeat of Friday, somewhat tight early and blown open when the Catamount bullpen came into play.

Thomas faced the minimum in the first, despite a leadoff single, aided by McCann throwing out a would be base stealer. In their half of the first, Tech picked right up with four runs on singles by Waddell, Radcliff, Hall, and Webb and a double by Guldberg.

The Jackets added a run in their 3rd on Radcliff’s double and Hall’s RBI single to make it 5-0.