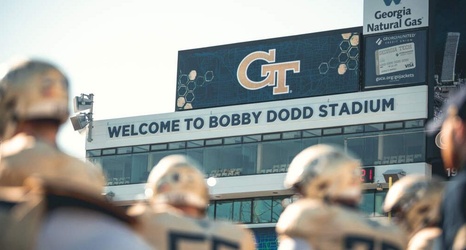 Tech wrapped up its first week of practice with an open session at Bobby Dodd Stadium on Saturday morning; fans were invited to attend, provided they remained socially distant and wear masks. For a chilly early-April Atlanta morning (with temperatures warming up from 30 degrees), turnout at Grant Field ended up being pretty good — no number was released, but anecdotally, it seemed that pods of fans made up around 60% of the lower west stand. Interestingly, despite not having concessions stands open and the low temperatures around the city, stadium officials prohibited the entry of any warm beverages, including the coffee I was looking forward to enjoying while jotting down notes for this piece.