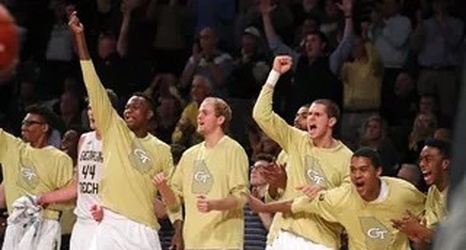 When the NIT brackets were announced a week ago, it’s safe to say that many Georgia Tech fans were excited by the prospect of a Clean, Old Fashioned rematch in round two. While Tech defeated Indiana 75-63, our rivals out to the east were unable to hold up their end of the bargain. Instead, the Yellow Jackets will get one more game in the friendly confines of McCamish Pavilion when they play host to the Belmont Bruins today. The Bruins advanced by defeating georgia 78-69 behind a barrage of three pointers.

Belmont, located in Nashville, may not have a ton of name recognition, but the Bruins and long-time coach Rick Byrd (6th among active Division I coaches in career wins) have built one of the best mid-major programs in the country.