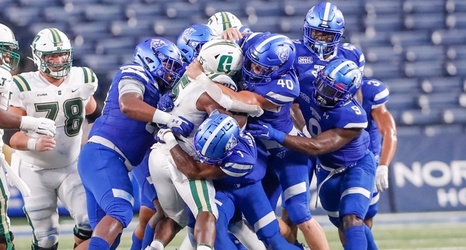 Georgia State used a potent running game and stout defense to earn its first victory of the season, 20-9 over previously unbeaten Charlotte, on a rainy night at Center Parc Stadium.

> The GSU defense held Charlotte to 276 total yards, the seventh lowest figure in program history and the lowest since holding ULM to 262 yards in 2018.

> That is the fifth time the Panthers have allowed fewer than 300 yards under defensive coordinator Nate Fuqua.

> Senior inside linebacker Blake Carroll led the defensive effort with nine tackles, including eight solo stops, a sack, a forced fumble and a pass breakup.