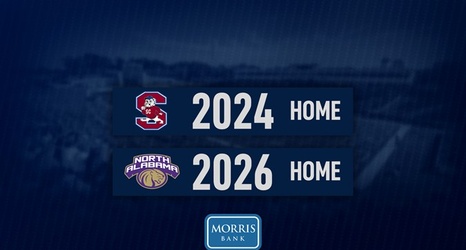 STATESBORO - Georgia Southern Director of Athletics Jared Benko announced Tuesday the addition of South Carolina State and North Alabama to the Eagles' future non-conference football slate. The Eagles will host SCSU on Sept. 14, 2024, and UNA on Sept. 5, 2026, both at Allen E. Paulson Stadium.

Georgia Southern and SCSU have met eight previous times in football with the Eagles winning all eight contests with the last coming in 2018. GS and UNA have never met in football.

This contracted games complete the non-conference schedules for 2024 and 2026, which now look like this.