Third Quarter Open Thread: Someone weathered the storm. But who? 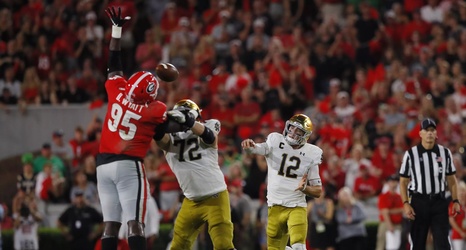 Georgia gave up a costly turnover on special teams, did some fairly odd early offensive play calling, and staunchly refused to cover Notre Dame tight end Cole Kmet for most of the first half. Despite all that they find themselves down only 10-7 and getting the ball to start the second half.

In a way it’s a victory for a Georgia team that could actually find itself in a larger hole than it does. Notre Dame holds a 163 to 114 yard advantage in offensive yardage, with Kmet making up the difference plus some with 68 yards receiving on 7 catches.