Kirby Smart proud to coach team “that will fight you.” 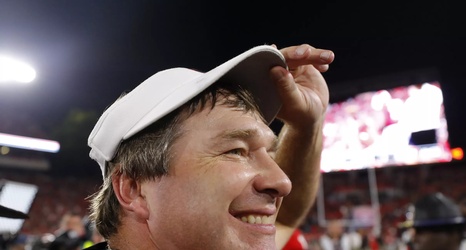 Kirby Smart took to the mic a few moments ago to answer questions following his team’s thrilling 23-17 win over the visiting #7 Notre Dame Fighting Irish.

A visibly hoarse Smart praised Bulldog fans, who he deemed “the best in the country”, veteran leaders like D’Andre Swift and Jake Fromm, and Notre Dame tight end Cole Kmet. The Top ‘Dawg also shared his thoughts on:

• How the UGA offense managed to get things going a little in the second half;

• How his team’s depth helped win the game;

• What Divaad Wilson has done to put himself in position to make some of the key plays of the night;

• What Isaiah Wilson’s return to the field did for his offensive line, as well as some thoughts on Justin Shaffer’s emergence;