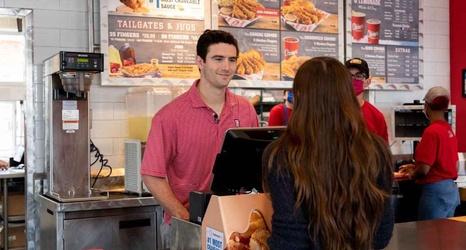 After leading the Georgia Bulldogs to their first national championship since 1980 on Monday, quarterback Stetson Bennett had one more thing to give out to Bulldogs fans: chicken fingers.

The MVP of the College Football Playoff National Championship win over the Alabama Crimson Tide handed out hundreds of chicken finger meals to surprised University of Georgia students at a Raising Cane's drive-thru on Thursday in Athens, Georgia. The restaurant chain's location near the school's campus was the first opened in Georgia.

Raising Cane's Chicken Fingers is a fast-food restaurant with its headquarters in another SEC city (Baton Rouge, Louisiana), known for its chicken fingers and famous "Cane Sauce.