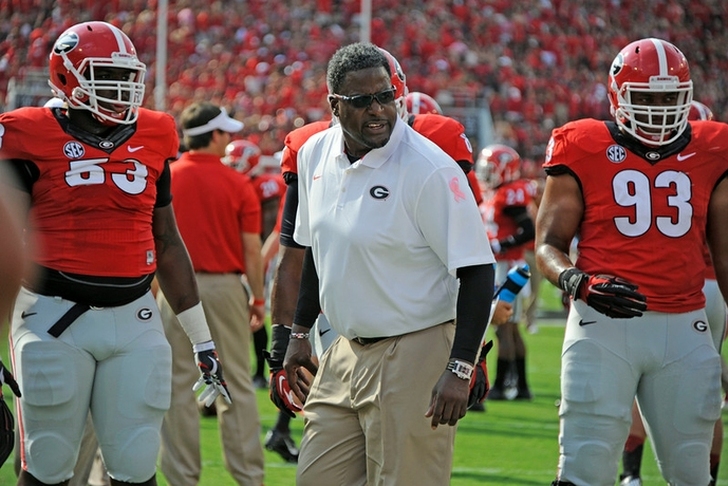 The Georgia Bulldogs were a finalist to land 2017 five-star defensive tackle Aubrey Solomon, and were the favorites to keep the Leesburgh, GA native in-state up until the final weeks of his recruitment.

However, Solomon ended up signing with Michigan, and head coach Kirby Smart thinks that may have to do with former UGA DL coach Tracy Rocker, who was Solomon's lead recruiter for the Bulldogs.

According to Dean Legge, Scout.com's Georgia writer, Rocker was let go because he got into a heated argument with Solomon's mother, which essentially eliminated UGA from contention in the five-star's recruitment.

UGA confirmed that this afternoon, but didn’t say if the assistant had been let go or left on his own. Rocker was named defensive line coach at Georgia on January 28, 2014. He stayed on during Kirby Smart's first season in Athens, but was said to have gotten into an argument with the mother of 5-star DL Aubrey Solomon, which pretty well ended the Bulldogs' chances of signing him. Kevin Sherrer is now the only coaching hold over from the Mark Richt era at UGA.

Rocker was not known for being an exceptional recruiter, but held his own. Still, he was known for development, and the Bulldogs' young defensive line played well as the season went on in Athens in 2016. According to reporting from Athens Banner-Herald, Rocker was in the first year of a two-year contract worth $525,000 per year.

Georgia still finished with a top three class, and did land in-state five-star safety Richard LeCounte III. However, they missed out on the state's other two five-star prospects in Solomon and quarterback Davis Mills (Stanford).

Rocker and Sherrer were the only Richt assistants retained by Smart when he took over after the 2015 season. Sherrer is the team's linebackers coach.

Rocker had spent three seasons as the defensive line coach of the Tennessee Titans before joining the UGA staff.

Follow our Georgia Bulldogs news page for all the latest Georgia football news!