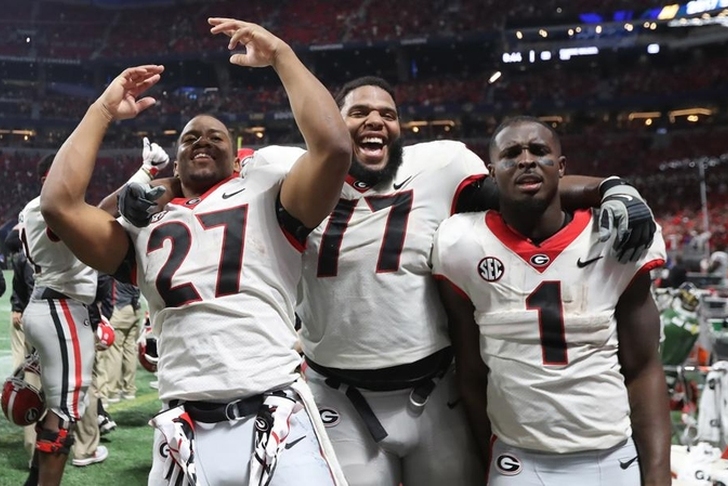 The Georgia Bulldogs enter the College Football Playoff following a dominant victory in the SEC Championship Game, and now comes a showdown against Oklahoma. Some are expecting the higher-ranked Sooners to win the game, but we know better. Here are three reasons why Georgia is guaranteed to beat Oklahoma on New Year's Day.

1) Dominant rushing attack vs. Oklahoma's defense
Oklahoma's defense has been notoriously bad throughout the course of the season, giving up over 30 points five teams this season. They've also been suspect against the run, ranking 40th nationally in that category. On the flip side, Georgia's rushing attack has been unstoppable, led by Nick Chubb and Sony Michel. Expect UGA to have their way running the ball in this one.

2) Georgia's defense's ability to slow Baker Mayfield
Georgia is at the top of every defensive category, ranking fourth in points allowed (13.2 per game) and in yards allowed (271 per game). Head coach Kirby Smart has clearly put his imprint on this team - they're extremely physical, force turnovers, and rarely miss a tackle. This defense will be the toughest this Oklahoma team has played by far, and that will show itself on the field.

3) Oklahoma's record in big games
Bob Stoops isn't around to choke away big games for the Sooners anymore, but that is a stigma this team has yet to relinquish. Since 2003, Oklahoma is just 3-7 in BCS/New Year's Six games. If they don't show up, Georgia will take advantage like they did against Auburn in the SEC title game.

Check out our Georgia Bulldogs team page for all the latest Georgia football news & rumors!