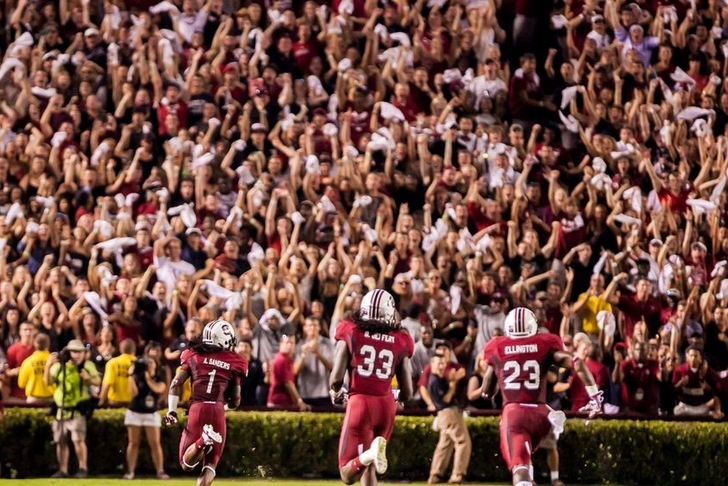 After heading into the locker room down 24-13 at the half, Georgia needed to get something going to avoid the upset in South Carolina.

The offense did pick up in the second half, but the Gamecocks continued to match touchdowns, keeping the Bulldogs at bay and pulling off the upset.

Todd Gurley took over after a slow first half, posting 131 rushing yards and a touchdown on 20 carries.

The Bulldogs were outgained 451-408 in total yardage.

Dylan Thompson was calm and composed throughout, making just one mistake while finishing 21/30 for 271 yards and three touchdowns to lead the upset.

Mike Davis was relatively quiet until late in the game, finishing with 17 carries for 66 yards.

Georgia and South Carolina scored touchdowns on five of eight total possessions in the second half.

Turning Point: After South Carolina turned the ball over in their own territory late in the fourth quarter, Georgia's offense had a chance to take the lead for the first time in the game, starting inside the Gamecock's five yard line.

The South Carolina defense held strong, forcing a field goal which Georgia missed from just 28 yards out. Instead of tying the game, Georgia gave the ball back to the Gamecocks still trailing by three points - that was the last time the Bulldogs possessed the ball.

1) Todd Gurley cannot be stopped. South Carolina's attempts to contain him worked in the first half, but fizzled out as the game went on - expect that to be the trend all year.

2) Georgia still has some work to do to contend as a top 5 team. Granted it was a tough matchup, but still the Bulldogs are clearly a notch below the teams in the top 5.

Throwback: An Interview With The Most Terrifying College Football Fan We've Ever Seen