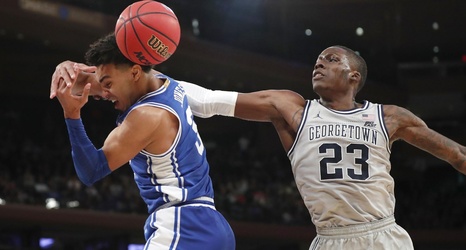 Three Georgetown Hoyas basketball players, including Josh LeBlanc, who entered his name into the NCAA transfer portal and is no longer with the program, are being accused of burglary, harassment and in one case, sexual assault, according to D.C. Superior Court documents.

Two women filed complaints in November about LeBlanc, Galen Alexander and Myron Gardner. One plaintiff secured a temporary restraining order on Nov. 20 against LeBlanc and Alexander after alleging that they burglarized her apartment and harassed her with threats. The other plaintiff, her roommate, alleges among other things that Gardner sexually assaulted her.