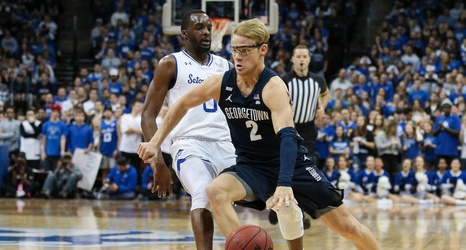 Your Georgetown Hoyas continued with their BIG EAST opening road trip with some late night action against the Seton Hall Pirates tonight in Newark, falling by a score of 78-62. This game was always going to be one of the most challenging away games of the conference slate, with the dominant potential of Myles Powell hanging over any plan of attack. Things looked particularly grim until—mere hours before tipoff—it was announced that Mac McClung would be returning to the lineup for the Hoyas.

With their normal starters back in action, it felt for the first few minutes as though things had returned to a comfortable and functional equilibrium for Georgetown.