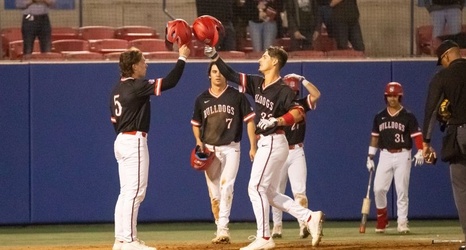 In the bottom of the sixth inning, Fresno State’s right fielder Nate Thimjon stepped to the plate.

The Bulldogs were in the middle of a scoring drought, and they had runners on first and third base — Blake Wink and Ryan Higgins.

The ‘Dogs had one out, and Higgins had just walked to first. Thimjon then set up and hit a three-run home run to give the Bulldogs a 7-0 lead.

The Fresno State Bulldogs went on to beat the Cal Poly Mustangs 13-0 at the Pete Beiden Field on Tuesday night.

The ‘Dogs got on the board early in the second as second baseman Andrew Kachel hit a two-run home run to left field, scoring third baseman Zach Morgan.