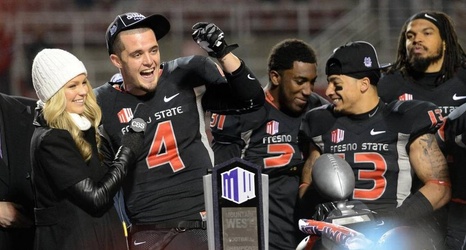 Count Derek Carr among those rooting on Fresno State to bring home a Mountain West Conference football championship Saturday in the title game at Boise State.

Fresno State is aiming for its first title since 2013 when Carr and the Bulldogs defeated Utah State 24-17 at Bulldog Stadium.

Carr completed 36 of 53 for 404 yards and three touchdowns against two interceptions that night. That same season, Carr led Fresno State to a 41-40 victory over Boise State after throwing four touchdowns.

He watched the Bulldogs defeat the Broncos 28-17 on Nov. 25 from the Bay Area as he and the Oakland Raiders prepared for a home game against Denver, and he says he’s hoping for the same on Saturday.