Could ‘X’ receiver again be a factor in Bulldogs’ rematch with Boise State? 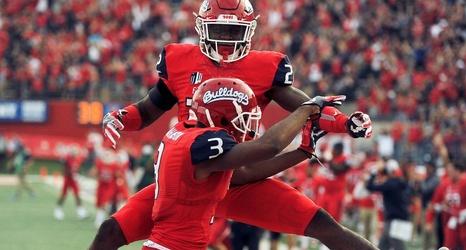 The Fresno State Bulldogs’ wideouts have made some stellar catches this season and Jamire Jordan added one to the list in their victory over Boise State to end the regular season.

Separating late from a cornerback and pressed against the right sideline, Jordan made a lunge toward a high pass from quarterback Marcus McMaryion and pulled the ball down for a 39-yard gain and a first down.

Fresno State wideout Jamire Jordan works through a drill in fall camp. Jordan had four receptions for 91 yards in the Bulldogs’ 28-17 victory over Boise State in the final game of the regular season.