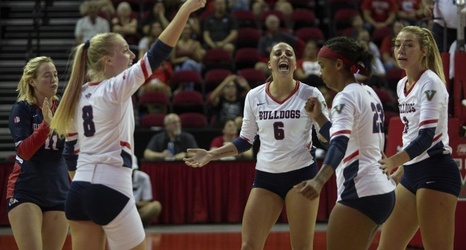 After a weekend that saw the Fresno State women’s volleyball win two games in a row, the Bulldogs faced the University of Nevada Reno (UNR) Wolfpack for the first Mountain West conference matchup of the season.

Despite the Wolfpack keeping the sets close, the Bulldogs defeated UNR in sets of 25-21, 25-20, 25-20 on Thursday night at the Save Mart Center.

The matchup began with both teams battling for every point, with the Bulldogs scoring outputs answered by the Wolfpack and vice versa. It wouldn’t be until halfway through the set that the bulldogs gained a three point lead to pull ahead of Nevada.