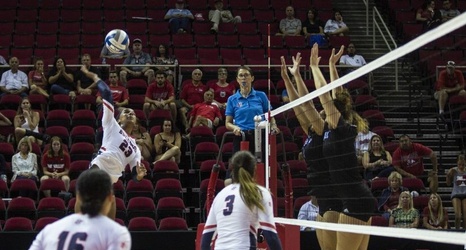 In the first game of the Fresno State invitational, the Fresno State women’s volleyball team fell to the California State University Bakersfield Roadrunners, 3-1, at the Save Mart Center on Sept. 5.

The match began with the Bulldogs attacking quickly to go up four points. The ‘Dogs’ defense started strong in the beginning of the match, allowing them to go on a 15-5 run.

Bakersfield committed many errors throughout the first match, which the ‘Dogs capitalized on.

A lack of communication for Bakersfield was a recurring theme during the first set. Bakersfield setter Sidney Wicks would commit a service error to give the ‘Dogs the win in the first set, 25-17.