Bulldogs back home and back on the winning side 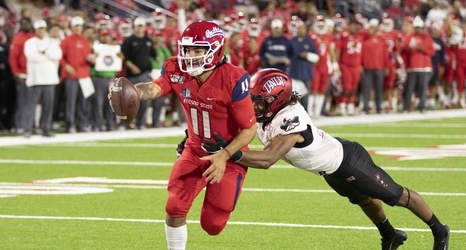 After a second half meltdown at Air Force last Saturday, the Fresno State football team was looking for redemption on Friday night against the University of Nevada Las Vegas (UNLV) Rebels at Bulldog Stadium.

Thanks to a stellar second half performance, the Bulldogs defeated the Rebels, 56-27, getting their third win of the season and their first in Mountain West Conference play.

The Rebels started the game on offense and after a couple of short yardage runs, the Rebels were able to complete a screen pass that went for 45 yards.

Despite driving into Fresno State territory, the Bulldogs stopped the Rebels in the red zone, allowing only a field goal.