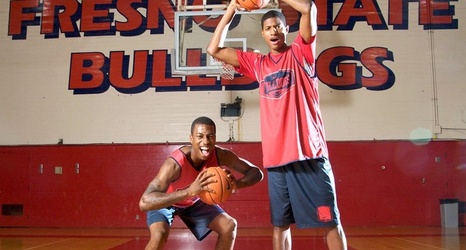 Paul George and teammate Mychal Ladd pose for a picture during their freshmen year at Fresno State. (File Photo/The Collegian)

Former Fresno State basketball standout Paul George continues to make his case for one of the top five NBA players in the league, as he was named to the 2018-19 All-NBA First Team, the NBA announced on Thursday.

This represents the fifth All-NBA selection for George and the first time he has been named to the All-NBA First Team. George had previously been a four-time All-NBA Third Team honoree.

George, a native of Palmdale, has become a bonafide NBA superstar after shining for two seasons at Fresno State before being drafted No.