A season-high 12 aces help the ‘Dogs sweep the Aggies 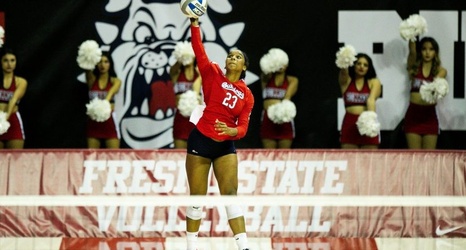 The Fresno State volleyball team swept the Utah State Aggies after posting a season-high 12 aces on Thursday at the Save Mart Center.

The Bulldogs came into this game short two key starters. Junior outside hitter Desiree Sukhov and freshman middle blocker Grace Doyle were sidelined by injury, so the ‘Dogs had to rely on other offensive weapons to win.

Both the ‘Dogs and the Aggies kept things close throughout the majority of the first set. Fresno State would lead by five points, 17-12, before the Aggies would go on an 8-1 run taking the lead, 20-18.