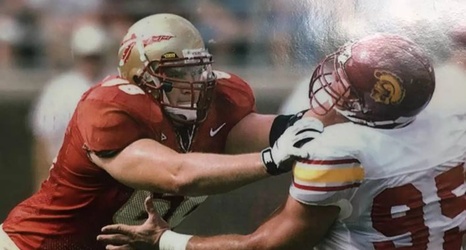 Jason Whitaker made his way to Tallahassee from tiny Lynn Haven near Panama City Beach, rated as the fourth-best offensive tackle in Florida high school athletics. That ranking was well earned, as Whitaker possessed a big long frame and quick feet. However, Florida State offensive line coach Jimmy Heggins moved Whitaker to offensive guard, and he redshirted his freshman year in 1995.

But Heggins knew what he was doing. Cutting an imposing figure at 6’5 and 300 pounds, Whitaker is known for his hard-nosed play style, and for playing through multiple injuries in his time in the Garnet and Gold.