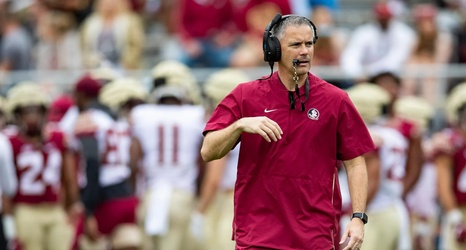 Florida State had its first chance to showcase its 2021 football team on April 10, hosting its annual Garnet and Gold scrimmage in front of a limited crowd (that included dozens of the best recruits in the country.)

While the game didn’t follow the typical format of drafting two separate teams (rather opting for offense vs. defense), it still gave us a chance to observe the team in a “game” format, with Mike Norvell and his staff placing the units in situational drills (99 yards to go, goal line, etc.)

Here are some quick observations:

We came into the day expecting the battle currently going on in quarterback room to continue to evolve — and that it did, as McKenzie Milton had perhaps his best day so far in the garnet and gold (well, black and gold for the QBs).