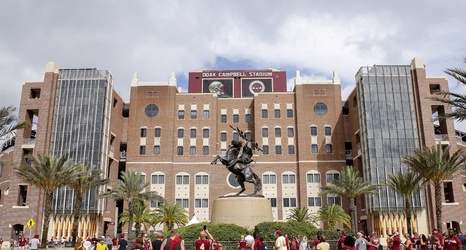 Chair-backs are staggered throughout the bowl of Doak Campbell Stadium to provide social distancing between groups of fans. Doak Corona Set Up267

FSU football will look to have its first winning season since 2017. Mike Norvell has the task of returning the Noles to prominence.

Luckily, he’s at the program that’s proven it can be elite, fall off, and regain elite status in recent memory.

Florida and Miami last reached the pinnacle in the early to mid-2000s. However, they have wallowed in mediocrity ever since.

Miami has only made the ACC Championship game once since joining the league(and got wrecked), and Florida’s best team in a decade still loses four games with a supposed Heisman candidate.