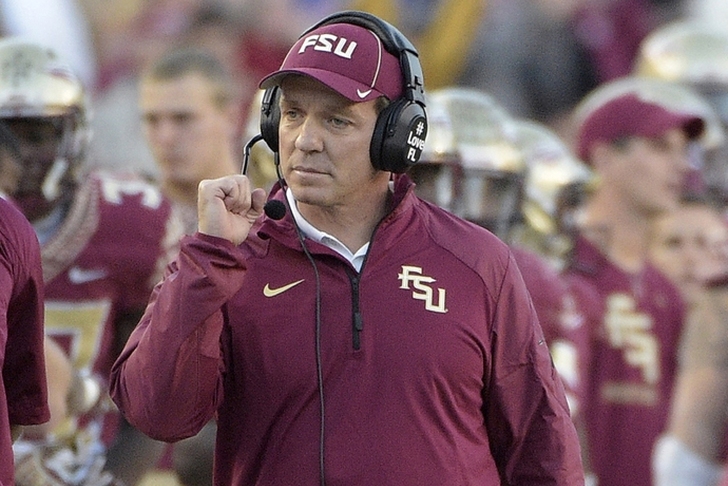 The Florida State Seminoles are in the process of putting together another strong recruiting class under head coach Jimbo Fisher. The Seminoles already have several players committed, but they aren't done yet. They're making a strong push during the last month of recruiting as we head towards National Signing Day on Wednesday, Feb. 3. Here's all the latest news and rumors you need to know for Florida State football recruiting.

FSU Lands Another
Florida State secured a commitment from three-star athlete Clifford Chattman after his official visit this weekend. Chattman announced his choice on Twitter.

Chattman will likely play safety or linebacker for FSU. The 'Noles beat out teams like Oklahoma, Georgia, LSU and USC for his services. Download the Chat Sports Android and iPhone app for more on the Chattman.

Four-Star DT Bumps Up Florida State
Following his visit this weekend, four-star DT Stephon Taylor has bumped the Seminoles into his final two.

"It was pretty good, I had a good time," Taylor told 247 Sports of his visit to FSU. "I liked it. The academics, the environment there was nice and I liked the coaching staff."

Taylor told 247Sports that it's down to Texas and Florida State, and that he loves both schools. He'll make his decision on Signing Day. For more on Taylor's recruitment, download the Chat Sports Android and iPhone app.

FSU Second For Keyshawn Young
Three-star athlete Keyshawn Young took his official visit to FSU this weekend and he has the Seminoles second on his list.

“FSU is second to Michigan right now,” Young told 247Sports. "My trip to FSU was good, the people, the culture, the city, everything. I got to hangout with Bobo (Wilson), Dalvin (Cook), Da’Vante Phillips. It was like being at home.”

Young wants to play WR and won't make a decision until Signing Day. Check out the Chat Sports Android and iPhone app for more on Young and FSU.

Checking Out FSU's Class
Florida State is currently sixth in the nation on Rivals.com's recruiting rankings. FSU has 20 commits, the fewest of any team that high. Of the players committed, 13 are four-stars or higher. Seven of the players have already enrolled, including QB Malik Henry. The gem of the class is five-star DB Levonta Taylor, the No. 10 player in the nation. For all the FSU recruiting news and rumors you need, download the Chat Sports Android and iPhone app.