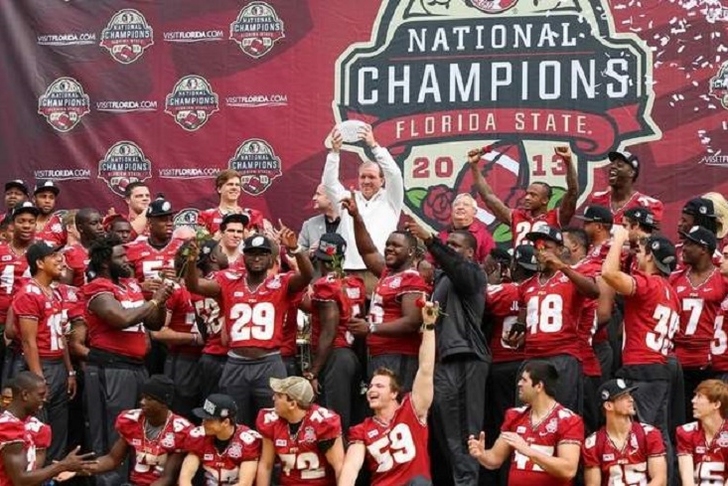 "All I have to say is one word: unconquered... That is pulsing through every Florida State Seminole and the University right now..."

Those were the thoughts of one marketing and professional sales major who attended the title game with fellow FSU students and alumni while recanting the Garnet & Gold's victory. The gridiron gladiators have become the toast of the town, as evidenced by an estimated 30,000 fans commemorating the 2013-'14 college football year with a party to show appreciation for their team's success.

The opening of February in Doak Campbell Stadium resembled an over-hyped Spring Game in temperature and attendance, with Head Coach Jimbo Fisher and several players taking turns thanking all for their support and playing to the crowd. The organizers of the event took their cue from Pasadena, showering Bobby Bowden Field with confetti as if to recreate the joyous aftermath of FSU's defeat over Auburn last month. Aside from no-shows such as Lamarcus Joyner and Bryan Stork, most of the team was present, including wide receiver Rashad Greene and Heisman-winning quarterback Jameis Winston, both of whom spoke to the fans.

While reflection on their accomplishments in 2013 seemed aplenty, the future for Seminole Nation seemed to be an underlying theme with the majority of the unit together. "We didn’t just develop a team, folks, we developed a program,” Jimbo Fisher proudly proclaimed towards the end of the event. “We’re gonna be here a long time.” The boast didn't seem forced either; with probably fewer than five players declaring early for the NFL Draft, along with a top-5 position on ESPN's RecruitingNation Class Rankings to date, the squad promises this is just the beginning for its loyal followers.

Are the 'Noles primed for a dynastic run? Many factors point to it. Fisher turned down a potentially more lucrative role in Austin and extended his contract with FSU. Winston will surely improve from an amazing season under center (even while garnering preseason All-American recognition and looking to secure the job at closer for the baseball team). With the architect and the engineer in tow-anything is possible, right?

The tell-tale signs, however, lie in history. The last two wire-to-wire national championship football programs were the Miami Hurricanes' squads of the late 1980's and the more recent Alabama teams lead by Nick Saban and A.J. McCarron. The resemblance between those Alabama teams and Florida State is easy to point out. Though Fisher's expertise is on offense and Winston is generally deemed a more dynamic player than his counterpart, the similarities in chemistry between star QB and CEO are uncanny. Besides the can't miss "Yellowhammer State" connection, both players were also underclassmen when they captured their first title.

When scanning the entire roster, however, the bond with the heyday "U" squads is equally as obvious. Even in a different era, the current 'Noles have the swagger that the very best of the best Sunshine State teams possessed, including those swashbuckling Miami ones. Many eventual pros on the teams in Coral Gables during the late '80s were not household names like Michael Irvin or Deion Sanders. In reality, the majority of the rosters carried glorified system guys — which besides #5 is basically what the new and improved Seminoles are — very good athletes who have NFL potential but no elite pro status.

2014 and beyond will determine if FSU Football can come close to the sheer domination of the ACC not seen since The 'Ole Ballcoach's last days. The new class of Seminoles are ready for a revival— and more champagne confetti campaigns. "It means everything...This school is a representation of everybody; the unconquered spirit," Winter Haven, FL native Aquiel Miller said. "[The football team] makes everyone really determined to go after their goals and is a sense of pride for everybody at the school."