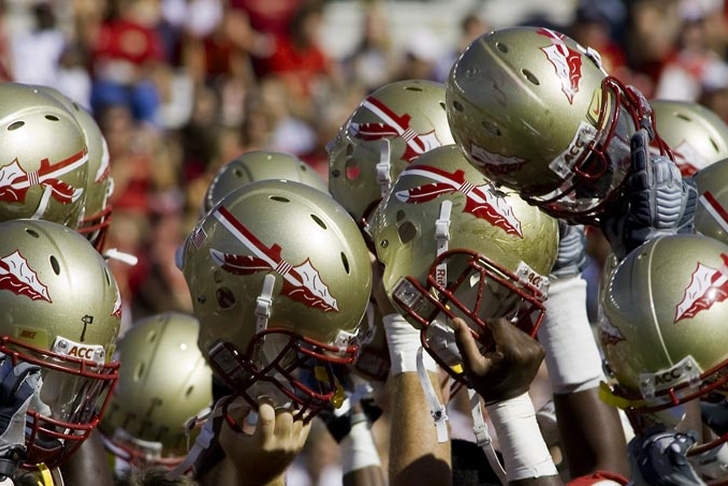 All they do is win, win, win... On the football field and off it. Jimbo Fisher was in a relaxed mood on National Signing Day, and for good reason. The FSU football program is operating like a well-oiled machine after another impressive class was officially introduced to the public.

Garnering the #3-rated recruiting class according to ESPN, the 'Noles were judicious and fiscal in their approach on who they signed. Make no mistake, FSU still nabbed plenty of big-time names that have the potential for greatness. Florida State was able to sign the #1-rated players from both New York and Florida, while sticking to a strategy aimed to match long-term viability with present-day impact.

While the cupboards in Jimbo Fisher's house of helmets are certainly not bare, questions have arisen that need to be answered leading into their season following a national championship. Key contributors will be leaving for the NFL Draft, including a few breakout stars and unit leaders who were lynch-pins for their side of the ball. We'll look at the newly added members of the Seminole team that have a chance of replacing these key FSU players, beginning with the defense.

The most crucial loss for FSU next year will probably be that of defensive tackle Timmy Jernigan. His sheer physical dominance and disruption of opposing offenses' run-game will surely be missed. Jaccobi McDaniel and Demonte McAllister are two other stalwarts on the D-line the 'Noles will lose. Out of all the positions, this is the spot that Florida State has the most uncertainty.

FSU looked to bolster their front with signees Derrick Nnadi, Demarcus Christmas, and Frederick Jones. Nnadi, the highest rated of the bunch, has the mass at over 300 pounds to wreak havoc, along with the hands to shed blocks— a critical trait at his position. Bradenton, Florida prospect Christmas also looks to be a candidate for a spot in the rotation heading into fall camp, with Frederick Jones adding depth. It should be noted that Jones was the teammate of Dalvin Cook, FSU's prized recruit, at powerhouse (and 6A State Champion) Miami Central High School.

Linebacker is the next area of concern for 2014's Seminoles. Losing stud Telvin Smith along with Senior Christian Jones is not easily rectified, especially considering the versatility each gave a destructive defensive lineup. State may have found their guys, however, in Jacob Pugh and Lorenzo Featherston.

Pugh is a local product from 5A Godby High School, a football factory less than three miles from the campus of Florida State University. Under the guidance of Head Coach Ronnie Cottrell, Pugh has flourished on the prep level— his size and mobility make him a natural fit to one day attempt to fill Smith's cleats. Featherston, a four-star signee out of North Carolina, is listed as a defensive end by most scouting profiles. He does have an intriguing athletic build (6'7'', 220) and experience lining up on the "weak" side of a defensive front. With a good spring/fall camp, he could be prepared to instantly come in and rush the QB on passing downs with his hand in the dirt or play standing up in coverage, similar to the role Jones performed later in his collegiate career.

Leadership is the common thread that binds Lamarcus Joyner and Terrence Brooks, a pair of veteran ball hawks in the secondary that surely made offensive coordinators cringe when turning on game tape. Fortunately, there is enough depth and star potential waiting in the wings to replace them, but three players from the 2014 signing class to keep an eye on are Trey Marshall, Javon Harrison, and Malique Jackson. Marshall is a four-star safety out of Columbia High, a rural area of the Florida Panhandle known for producing top talent. Harrison and Jackson are the "athlete" projects, with the former being a steal from Virginia Tech's recruiting class and the latter a gifted runner and thrower who could be used in an array of roles before it's all over.

The offensive side of the ball for Florida State is a bit more stable than the defense, but there are play-makers that need to be replaced quickly. The most glaring that comes to mind is Kelvin Benjamin, a 6'5'' specimen who will likely not make it past the end of the first round without hearing his name called by Roger Goodell. Kenny Shaw is another proven commodity that had the trust of "Famous Jameis", particularly in the Seminoles' two-back shotgun formation. Wide receiver is also the position that has the most star power out of the new class, starting with five-star recruit Travis Rudolph and four-star standout Ermon Lane.

Rudolph is quite polished, and should benefit from having Rashad Greene as a template this coming season. Lane may need more development, but shows the natural instincts that could make him an all-conference gem. He competes for the ball at its highest point, and uses his 6'3'' frame like a basketball player to shield defenders and catch the football, similar to Benjamin. Javon Harrison should not be overlooked, either, due to his desire to play WR at the next level.

The O-Line gained a huge boost when Cameron Erving, the 27th-ranked pro prospect by NFLDraftScout.com around the time of the BCS Title Game, decided to return to Tallahassee for an additional year. The only significant loss is Center Bryan Stork, who played well for FSU despite battling through injuries most of his career. JUCO product Chad Mavety, along with Roderick Johnson and Derrick Kelly Jr., are the main candidates to potentially see time on the field in 2014. The offensive line was an area of emphasis with the class, but most of the players signed look to be red-shirted.

Running back is the last big piece to the puzzle of the Seminoles' new recruiting class. Florida State has displayed consistent balance under Fisher's pro-style offense, with multiple formations and the steady use of a fullback all being staples of his attack. Ball carriers Devonta Freeman and James Wilder Jr. will make the early leap to the pros, making the added loss of lead-blocker Chad Abram a possible black-eye for the garnet and gold backfield. Jimbo made sure to shore up his ground game with running backs Dalvin Cook and Johnathan Vickers. Cook is arguably the best player of the entire class, a five-star talent ranked second at his position in the country. Expect him to see hand-offs from Winston behind center sooner than later. Vickers is an insurance policy with decent lateral mobility who runs harder than his 212 pounds would indicate. While the level of competition is always a concern coming out of historic 2A program Tallahassee North Florida Christian, his championship pedigree should bode well for the transition to prime-time college football.

The 28 players who make up the 2014 FSU recruiting class have been chosen for one thing— stability. The 'Noles are at the top of the mountain, and have an identity in all three phases of the game. The coaching staff at Florida State since Fisher's ascension rarely misses on prospects, and this bunch will be no exception. Even if just a small portion contribute right away, plan to become familiar with most of these Seminoles in the years to come.