Report: FSU RB Karlos Williams Being Looked At In An Armed Robbery Case 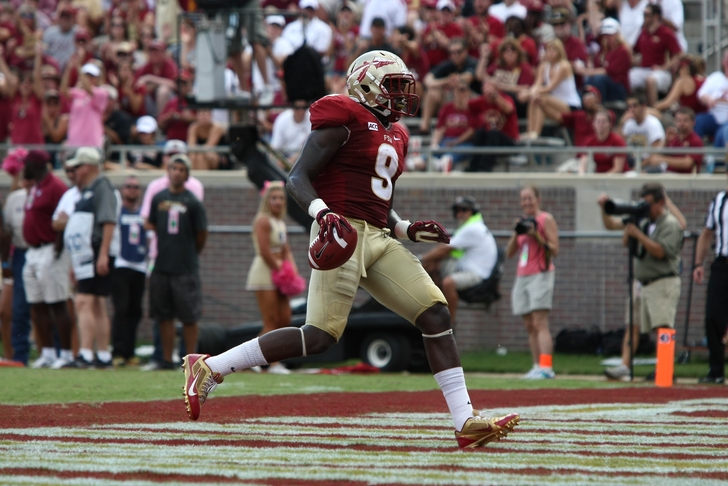 FSU running back Karlos Williams isn't just facing an investigation into an alleged domestic assault, as previously reported. He is also being looked at for playing an alleged role in an armed robbery which occured during a pot deal that went bad.

Per ESPN's Mark Schlabach and Brett McMurphy, "the Florida State Attorney's office for the 2nd Judicial Circuit in Tallahassee last week attempted to interview Williams about a June 23 robbery of an FSU student. Williams declined to speak to an assistant state attorney and an investigator from the Tallahassee Police Department about the incident last week, state attorney Willie Meggs told ESPN.com."

ESPN reports that on July 30, Tallahassee police took Daravius "Gutta" Lawrence (then 17, now 18) into custody for his alleged role in an armed robbery of Freightlin Shooter Cox, a 26-year-old Florida State senior who is also a retired Marine.

Cox indicated to Tallahassee authorities that he was robbed by three men while purchasing pot at his home near Seminoles' Doak Campbell Stadium. That purchase fell apart, Cox told the Tallahassee police, and he was subsequently held up by two other armed men allegedly accompanying Lawrence.

Per ESPN "Lawrence has been charged with robbery with a firearm, a first-degree felony, and faces an upcoming criminal trial as an adult. The two armed men haven't yet been arrested, according to sources close to the investigation."

Williams was recorded as an "associate" of Lawrence on Tallahassee Police Departments' initial report. Police spokesperson David Northway revealed to ESPN.com that a police investigator had attempted to conduct an interview with Williams in June to no avail.

"At that time, Mr. Williams agreed to come in for an interview on Monday of the next week [June 30]," Northway said, via ESPN.com. "He did not show up for the interview. The investigator did try to reach him, and [Williams' girlfriend] told the investigator that they had hired an attorney and would not be giving a statement."

Williams has yet to be charged in either the domestic assualt case or the armed robbery case.

On Friday, head coach Jimbo Fisher refuted a report by a radio station in Jacksonville, Florida, stating that Williams was on the cusp of being suspended for an unspecified violation of team rules.

"There's another false report, and that's amazing how things happen," Fisher said to reporters. "Whoever has sources, whoever has rumors, needs to check who they are talking to -- because that is about as far from truth as there is."

Williams was in pads and practicing with the team on Monday.