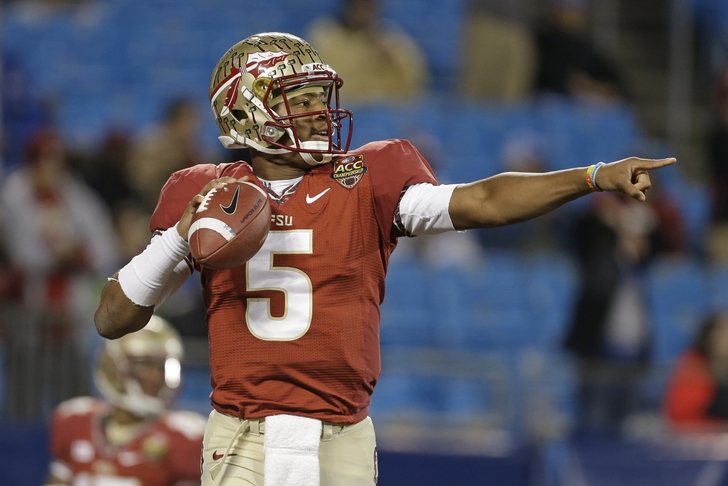 Florida State Seminoles starting quarterback and reigning Heisman Trophy winner Jameis Winston faces a disciplinary hearing enacted by the school that will look into allegations that he raped a fellow student back in December 2012.

Regardless of the fact that Florida State Attorney Willie Meggs announced in late 2013 that Winston would not be criminally charged for the alleged incident, Florida State is reopening their investigation in order to determine whether he violated university code of conduct rules pertaining to sexual conduct.

Per ESPN.com, Florida State would employ three individuals not affiliated with the university to evaluate Winston and his conduct. Winston and his accuser would be both be able to strike one of the individuals' evaluations off the record. However, this is still an unconventional (and potentially damning for Winston) way of doing things for a university that usually handles these hearings in-house.

If these outside investigators deem Winston to have committed some form of wrong-doing, Winston could face a bevy of problems (including legal recourse) not just limited to expulsion.

According to Michael McCann of Sports Illustrated, the weight of potential discipline and legal action could cause Winston and his representation to pursue a "radical option" that could end up being Winston's "best legal move" - dropping out of Florida State:

Winston could still face criminal charges until 2017. Winston was only investigated for criminal conduct and not tried, meaning the Double Jeopardy clause of the Fifth Amendment does not protect him from being charged and tried. Winston thus has an incentive to prevent any new facts or testimony from emerging that might persuade a prosecutor or a grand jury to take a second look at what happened.

Winston also has an incentive to avoid the jurisdictional reach of Florida State. If Winston withdrew from school, he would move outside of the university’s jurisdiction and could not be forced to participate in a university disciplinary hearing. The same is true of any potential investigation by the Atlantic Coast Conference or the NCAA, which would lose its leverage over Winston -- his eligibility to play football for an NCAA member institution -- the moment he quits college football. These institutions could still conduct hearings into Winston and related decision-making by Florida State, but his absence would significantly limit their investigatory scope.

Winston leaving Florida State would also negate any potential discipline by the NCAA should it conclude that Winston worked with the same autograph dealer linked to Georgia running back Todd Gurley.

Winston has yet another important reason to drop out: He may later have an adversarial relationship with Florida State as a co-defendant. It is widely expected that Winston’s accuser will eventually sue Winston, Florida State and the Tallahassee Police Department. This litigation could place the three as co-defendants in the same lawsuit or as defendants in separate lawsuits. In either scenario, each would attempt to deflect fault away from itself and onto the other two. Should Winston testify in a disciplinary hearing, Florida State could later use those statements to pin the blame on Winston.

Alan Milstein, an attorney who has worked on behalf of high-profile sports celebrities before, indicates that Florida State's current tact could end up costing Winston in the long run if he decides to take part in the university's disciplinary hearing.

"What is troubling about the Winston saga,” Milstein said, “is the extent to which FSU has such difficulty treating him as it would any of the students on its campus. First, it seems they tried to shield him from an investigation, and now they want to show they are policing their program, all in an effort to protect their considerable valuable brand.”

If Winston decides to drop out, there is plenty of downside to consider as well. His Heisman could be in jeopardy along with his NFL stock, putting his career path and potential future earnings in limbo.

Either way, Winston finds himself in a major bind that could end up costing him one way or the other.

The Story Of The "Catfished" Florida Commit Takes Another Bizarre Turn