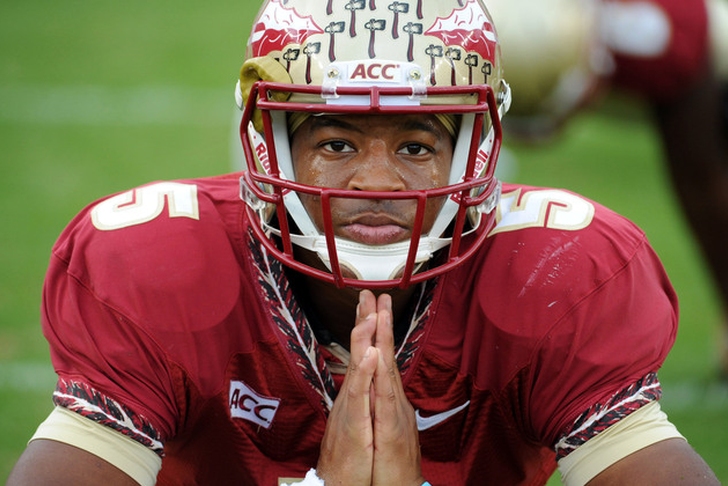 On Thursday at 2 pm EST, State Attorney Willie Meggs will announce the results of the investigation into whether or not Heisman candidate Jameis Winston committed sexual assault last December. Winston, a freshman quarterback at Florida State , has been accused of raping a blacked-out FSU student at an on-campus apartment. Winston maintains that the liason was consensual.

Reports of the allegations first surfaced on November 13, 11 months after the encounter took place. According to the accuser's lawyer, she was discouraged from pressing charges by local authorities, although those allegations were never officially confirmed or denied.

On November 20, word got out that a DNA sample taken from the accuser's underwear matched Winston, and Winston's attorney quickly issued a statement maintaining that the sample was no surprise as the encounter was consensual.

We'll be providing live updates over the next hour leading up to the news conference, covering both the announcement and the general reaction.

1:26 pm EST: ESPN is analyzing the impact of the announcement on Winston's Heisman chances, because of course they are.

1:31 pm EST: Take this with a grain of salt, but we're hearing STRONG indications that Winston will not be charged.

1:37 pm EST: A source who helped draft Meggs' statement told ESPN 97.9 Tallahassee's Jeff Cameron that no charges will be filed.

1:48 pm EST: Hearing a lot of chatter about the discrepancy between the accuser's blood alcohol level (.046) and her claims that she was "blacked out".

1:57 pm EST: Meggs says there was another person's DNA also picked up in the accuser's lab work

1:58 pm EST: Reporter asks about the discrepancy in the accuser's blood alcohol level and her personal claims - Meggs says its in the report, but confirms it was .04 and no drugs were present in her system.

2:00 pm EST: Did Meggs consider filing charges against the accuser for filing a false report? Meggs: "No we did not."

2:01 pm EST: "Did you match the second person's DNA sample to another individual?" Meggs: "Yes we were. Person was not related to the sexual assault claims."

2:01 pm EST: "Was there pressure to come to this conclusion before the Heisman Trophy?" Meggs: "When is that?"

2:02 pm EST: "Could you tell if investigators treated this case differently because Winston was a football player?" Meggs: "Sometimes you hear what you want to hear - I was not present when any of this happened, but I don't think it...don't think it had that much impact."

2:03 pm EST: "Any evidence that TPD tried to push this aside?" Meggs: "Obviously it would have been better if this was handled a little different, but hindsight is 20/20."

2:04 pm EST: "Any indication that the alleged victim knew the suspect prior to the event?" Meggs: "No, no indication."

2:06 pm EST: "Did you think the victim made up the allegations, or do you just think there wasn't enough evidence to file charges?" Meggs: "I'll let you make your own conclusions...we came to the decision that it was not a case that we could bring forward because we would not have the burden of proof...or reasonable likelihood."

2:06 pm EST: "Any chance that more evidence or new witnesses could change things?" Meggs: "I'd never say there's no chance

2:08 pm EST: "Was there a sexual assault?" Meggs: "Well, that's kind of why we're here...if there was evidence to support that, we would have brought the case."

2:14 pm EST: Meggs: "If we have a case, we'll pursue it...to say there was reluctance to pursue charges, we always have reluctance."

2:15 pm EST: "Any idea why the accuser was reluctant to tell you who her boyfriend was?" Meggs: "Well...tell us about your girlfriend!"

2:17 pm EST: Meggs: "You don't need to have witness cooperation to file charges...[other Florida DA] just brought charges in a murder case, and he didn't have victim cooperation...cause he's dead."

2:21 pm EST: Meggs: [the accuser's] testimony...it has some problems with it. There's some thing she can't remember, [and that leads to] us being unable to bring charges.