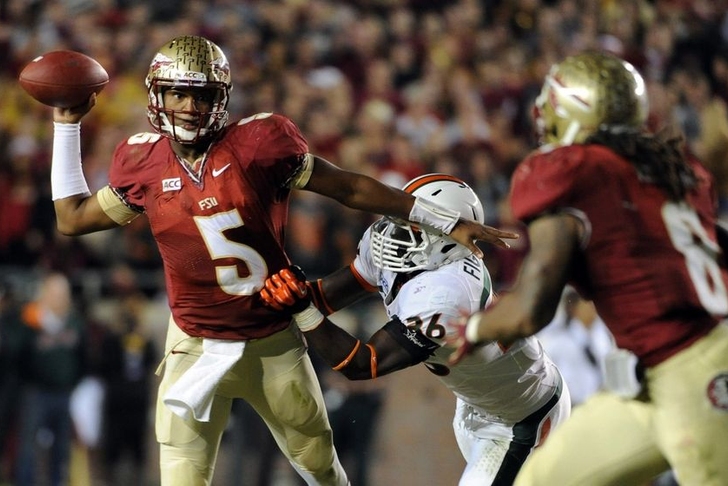 The Florida Gators and Florida State Seminoles meet up to ignite their fierce rivalry, with the Seminoles chances at a playoff berth on the line. Florida is bowl eligible, but would love a win over rival FSU to pad their resume.

Florida Outlook: The Gators have been a tough team to figure out for most of the year. While they have looked bad at times, they did knock off Georgia in a game that temporarily saved Will Muschamp's job, but then lost at home to South Carolina.

Overall, the offense has been mostly average - struggling to pass but dominating in the run game. They average over 200 yards rushing per game thanks to quarterback Jeff Driskel and rushing duo Matt Jones and Kelvin Taylor.

Florida State Outlook: The Seminoles pulled out another close win, this time over Boston College, as they continue to walk the tight-rope that is their undefeated season.

Jameis Winston caused a stir by pushing an official and staying in the game, but he led the Seminoles to another game-winning drive to keep their title hopes alive.

Florida State has now won by a combined seven points over Miami and Boston College, so while they still haven't tripped up, their reign as one of the top teams in the nation is looking shaky.

What to watch for: The obvious here is Jameis Winston and his play in this game. After last week's controversy, odds are high that extra eyes will be on him against Florida. While Winston should continue to impress, expect the Gators to try and bait him into a dumb penalty or two along the way.

With how slim a margin the Seminoles have been walking, one penalty could cost them this time.

The Gators have a chance in this game because of how vulnerable the Seminoles have looked the past few weeks, but it still may not be enough. If this game were played in Gainesville, Florida would have a better chance at pulling the upset.