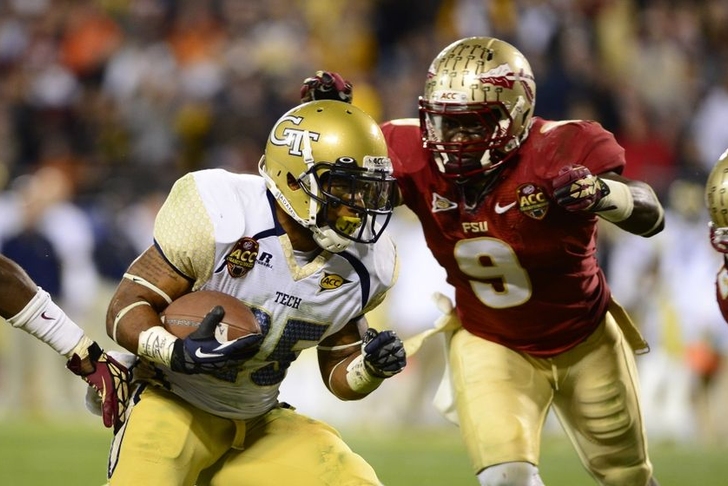 These teams didn't meet during the ACC's regular season schedule, and will meet for the first time since the 2012 ACC Championship.

The stakes are high for Florida State, who is looking to hold onto a Playoff spot with a victory in this game.

Florida State Outlook: The Seminoles continue to squeak out close wins, and have tight-roped their way to one of the top spots in the nation.

Despite the controversy, Jameis Winston has come up clutch in certain spots this year, although his 21/17 touchdown to interception ratio is a far cry from the 40/10 he posted in 2013. He has also thrown an interception in six straight games.

Still, the Seminoles boast one of the top passing games in the nation, ranking 10th with 314.9 yards per game through the air.

Georgia Tech Outlook: The Yellow Jackets had already secured a spot in the ACC Championship, but boosted their overall resume with an upset over #9 Georgia to wrap up their regular season.

Georgia Tech has relied almost exclusively on the run this year, ranking fourth in the nation with 327.9 yards per game. They have thrown for just 141.7 yards per game in comparison.

Despite the prolific rushing totals, the Yellow Jackets do not have a 1,000 yard rusher, though they have three players with over 500 yards rushing on the year (Justin Thomas, Zach Laskey, and Synjyn Days).

What to watch for: As usual this game will come down to how well Winston plays. The quarterback has had clutch moments, as well as times of struggle so Georgia Tech will need to force him into some mistakes to keep this game within reach.

On the other side, establishing a run against a strong Seminoles defense will be key for the Yellow Jackets.

Florida State has enough talent on both sides of the ball to overcome a few mistakes, whereas Georgia Tech will need to play a clean game to pull off an upset. Things slide the way of the Seminoles if the game plays according to plan.